Heading into the COVID-19 pandemic, colleges and universities that partnered with Ad Astra had greater odds of having a course scheduling plan and were able to announce their plan earlier than comparable institutions. Many Ad Astra partners also had greater odds of being online, independent of political control, which potentially saved thousands of lives (Andersen et al., 2021). The following are five key factors that helped Ad Astra institutions be better prepared heading into the pandemic and provide insights into how higher education institutions can become more resilient through the changing landscape.

For United States higher education, Fall 2020 was one of the most uncertain periods for course scheduling in the past century. In July 2020, Ad Astra deployed a survey to more than 500 institutions to better understand their course scheduling plans, and respondents (n=57) offered their insights into how they were addressing uncertainty for the upcoming semester. Beyond the deliberations of whether instruction at their institution would be in-person, hybrid, or online, many colleges and universities explored a unique willingness to change course offerings.

Among Ad Astra institutions, the most frequent option was in-person instruction with reduced seating capacity (82 percent), followed closely by a hybrid instructional model that was predominately online (77 percent). As many institutions move toward in-person instruction this fall, it is important to remain flexible to accommodate scheduling plans that might better serve students and the community, whether it be eight-week semesters or additional in-demand offerings.

Whether an institution was in-person, hybrid, or online, safety was a primary concern for nearly all institutions. Among Ad Astra institutions, nearly all (89 percent) limited lab or studio space while 80 percent reduced building capacity and limited faculty and student travel (78 percent). 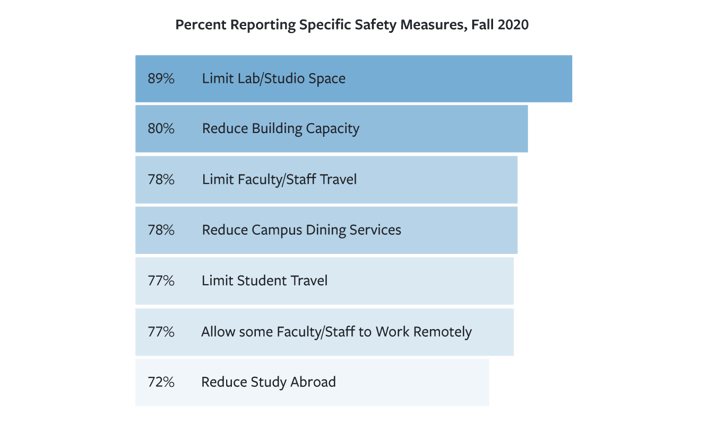 Protective actions like reducing seating and building capacities enabled institutions to reduce the likelihood of disease transmission, a key concern for many students and faculty. These proactive measures also signaled to the broader community that institutions were doing what they could to address challenges facing the resumption of in-person instruction. As institutions begin to navigate the next normal, safety should still be a primary consideration, whether it be requiring or recommending vaccinations, social distancing when appropriate, or the continued availability of sanitizers and cleaning supplies in the classrooms.

While many press releases or news articles featured the Chief Academic Officer or Provost announcing the decision for an institution to be in-person, hybrid, or online, the course scheduling decision was nearly always influenced by a cadre of stakeholders. Among the most influential stakeholders in the decision were public health officials from the state health department (85 percent) and national public health officials (Centers for Disease Control 80 percent). Our prior research also revealed that the course scheduling decision had a political context. Institutions in Democratic-controlled states had greater odds of online instruction while institutions in Republican-controlled states had greater odds of in-person instruction, highlighting the influence of the Governor of the state (82 percent) as a key stakeholder in the deliberation.

As colleges and universities move forward, the political context will likely continue to be an important factor, particularly for public institutions. Equally important is the need for administrators and diverse stakeholders to continue to collaborate and work together to facilitate the best decision for students, faculty, and the broader community. 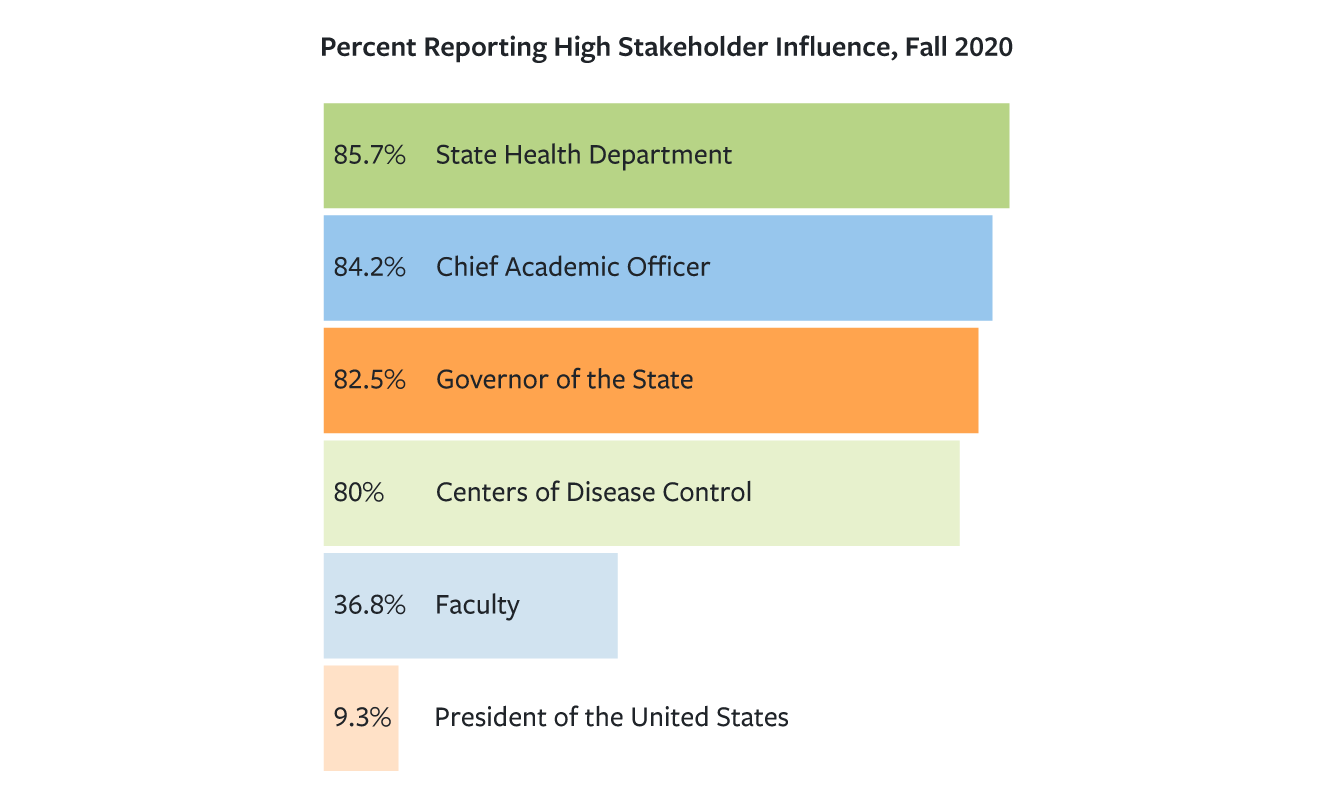 While social desirability cannot be entirely ruled out, it is important to provide some context. At the time the survey was deployed, many of the items that were asked of respondents included information that was not readily available in the public domain. One reason why it is likely that CAO communication was so strong was that normally the registrar, our survey respondents, do not communicate directly with the CAO of their institution about the modality of courses. In Fall 2020, CAOs were often directly involved in the course scheduling process, and this likely had a positive impact on the perception of "effective communication" as well as confidence in the CAO because they were exploring a variety of options as described above.

One way that CAOs can stay engaged with enrollment managers, and vice versa, is through a strategic planning process and framework that facilitates improve course scheduling decisions and student success. During the pandemic, Ad Astra developed academic content entitled, Managing the Academic Enterprise, a course to be completed by diverse stakeholders in higher education that help align strategic challenges like enrollment, schedule refinement, and financial health. 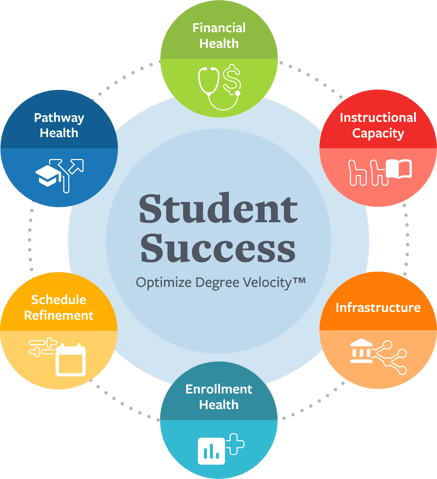 Factor 5: Enrollment is a challenge and is linked to financial health.

Course scheduling decisions do not occur in a vacuum and the decision to be in-person or online in the fall influenced fall enrollment, which in turn, influenced the financial picture for many institutions. In a recent, nationally representative survey of higher education conducted by Ad Astra, the College Crisis Initiative, and The Chronicle of Higher Education, we found that two-year institutions experienced a significant decline in enrollment with half experiencing  a greater than 10 percent decline) followed closely by baccalaureate institutions. While the intermediate to long-term impact may not fully be understood at present, it is increasingly clear that the declining enrollment was not abnormal for simply the fall 2020 semester. Spring 2020 enrollment was also down, an impact perhaps most acutely felt by private baccalaureate institutions as they are more tuition-dependent.

If an institution, particularly a private institution, experiences a decline in enrollment by five percent, that is a challenge. However, the problem could be much worse from a financial picture if the institution had to discount at a greater rate than in prior years to obtain a more modest decline in enrollment. As the figure below indicates, over half (53 percent) of private baccalaureate institutions discounted first-year tuition at a rate exceeding 50 percent, while one-quarter discounted at a rate of nearly two-thirds (64 percent). Consequently, the linkage between enrollment and finances is one that will be increasingly important as institutions move forward post-COVID.  Strategies exist to improve enrollment and finances, but solutions must be well articulated and integrated. 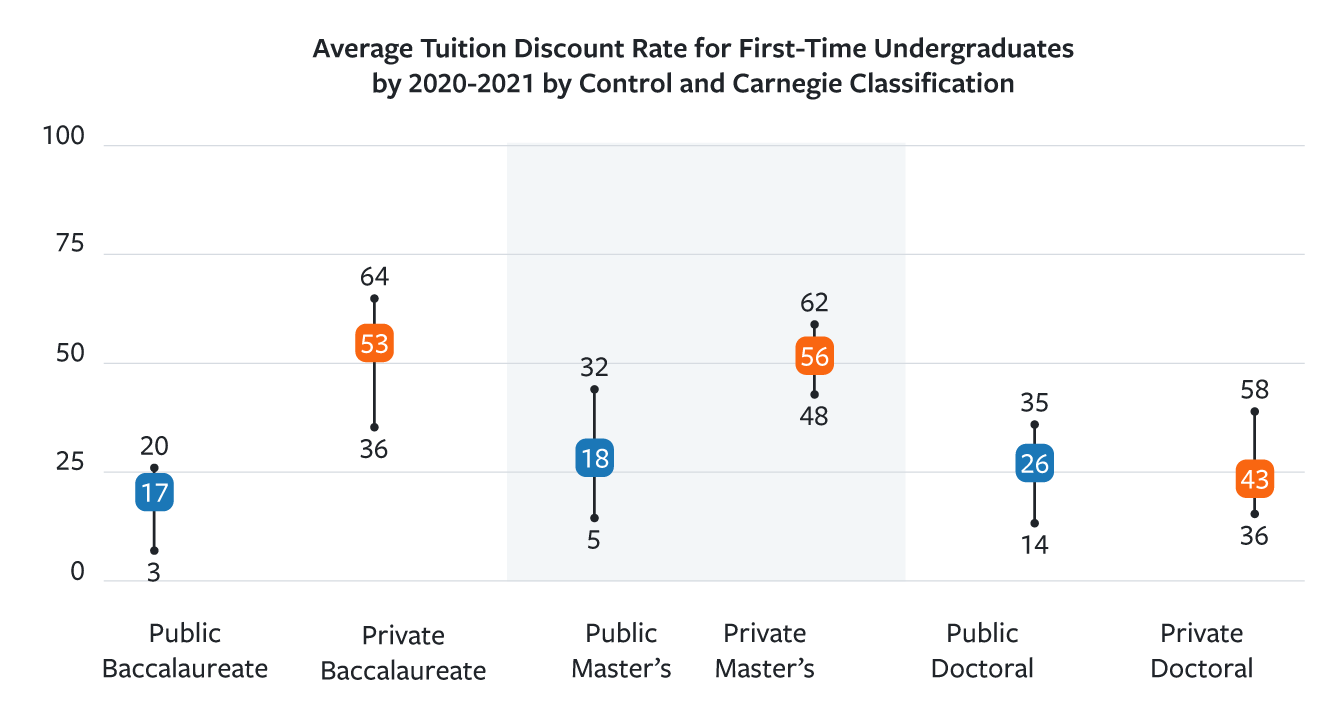 As institutions transition into Fall 2021, it is crucial that institutions stabilize their enrollment and financial health. By partnering with Ad Astra, institutions can get the help they may need to stabilize enrollment among existing students. Strategies such as standardized meeting patterns, offering in-demand courses in primetime, and offering more flexible course offerings (whether that be from one semester to the next or differing points in the day) can help institutions improve their student credit hour production, student retention, student time-to-completion, and even revenue.

As our institutions were better prepared prior to the pandemic they are increasingly well prepared as we move forward because they are actively: 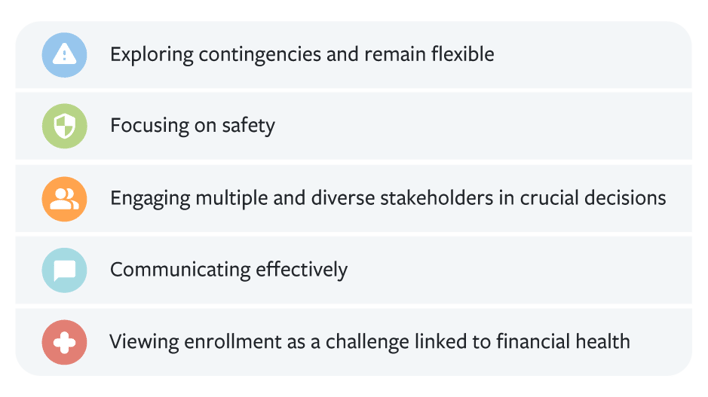 If you would like to learn more or explore the solutions these institutions used to achieve successful results, let us know in our contact form.

Methods: In July 2020, a survey was sent to 502 institutions of higher education to better understand their course scheduling plan(s) for Fall 2020. Respondents represent a population frame of all Ad Astra-collaborating institutions, that were Title IV-eligible, degree-granting institutions, that have first-time, full-time undergraduates in the United States. Respondents completing the survey for their institution had the position title of "Registrar," "University Registrar," or "Director of Registration," or a related designation (e.g. "Director of Enrollment and Registration"). Each respondent was sent an introductory e-mail, an e-mail with a survey link, a follow-up e-mail, and a final reminder. Each respondent was also attempted to be contacted by telephone, and in most instances, a voicemail message was left as a reminder, and a follow-up e-mail was sent to the telephone call. Survey response rate was 11 precent (n=57). The response rate was attributed, in part, by eligible respondents who were unable to fill out the survey due to other prior obligations (e.g. "too busy"), time constraints (e.g. "I just got back from vacation. Can I have an extension?") and/or uncertainty around their institutional plans at the time the survey was deployed. 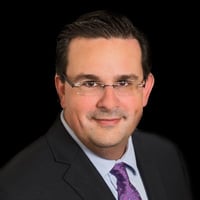 John Barnshaw is the Vice President for Research and Data Science at Ad Astra, where he directs the Higher Education Scheduling Index, a benchmarking study for course scheduling efficiency and analytics, with more than 300 institutions participating. In his role as Vice President, he is responsible for creating research and statistical solutions that help graduate more students faster while promoting, equity, align college-career pathways, and financial stability for institutions of higher education.

Prior to joining Ad Astra, John served as Director of Research and Public Policy at the American Association of University Professors, where he directed the Faculty Compensation Survey, the largest survey of faculty salary and benefits in higher education. Dr. Barnshaw also directed the National Study of Instructional Costs and Productivity (Delaware Cost Study), a longitudinal benchmarking that explores faculty teaching, separately budgeted research and public service expenditures at the discipline level for four-year institutions.

Christopher Triplett is a Solutions Architect at Ad Astra. He is responsible for infusing industry knowledge, data, and subject matter expertise across the organization. Before joining Ad Astra in 2017, Chris spent 10 years working in student affairs administration with roles in student success initiatives, residence life, conference services, and student conduct. Having higher education experience at both the institutional and vendor level, Christopher has a unique understanding of the challenges colleges and universities face. 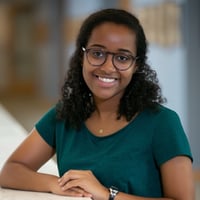 Kalekidan Yeshiwas is a Research and Data Science intern at Ad Astra and a senior at the University of Kansas, where she is a mathematics major with a minor in journalism. Prior to joining Ad Astra, Kalekidan served as a student assistant in the Office of Analytics, Institutional Research & Effectiveness at the University of Kansas. Kalekidan is passionate about higher education, data journalism and visualization, and helping organizations facilitate unit and institutional improvement.